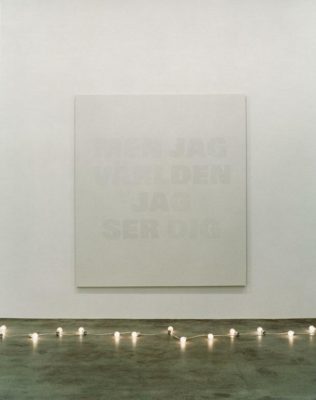 Perception is a recurring theme in the work of Rémy Zaugg, as is the use of prefabricated elements such as auto lacquer and typography. Believing that figurative and abstract painting had run its course, he chose to experiment with color and texts that explore not only the act of seeing, but also encourage a broadening of consciousness.

The sentence MEN JAG / VÄRLDEN / JAG SER DIG [BUT I / THE WORLD / I SEE YOU] was originally to appear in four neon signs atop the Foreign Ministry in Bern in the four national languages of Switzerland, a project that was never realized. Instead the artist translated the text to Swedish and adapted the concept to a large panel painting in an understated monochromatic palette. Using the placement and visual codes usually reserved for advertising, Zaugg entices the viewer with an enigmatic yet simple text that explores words, the image and the act of seeing.

The finishing touches in the process, including the polishing and varnishing, allow the colour and the typographical form to just be, beyond all else. These processes dematerialize the parts making up the image, they destroy the paint particles and sublimate them. The image becomes colour more than colourful matter. There is colour and text—and there is nothing else.   Rémy Zaugg

Artworks by Rémy Zaugg in the collection