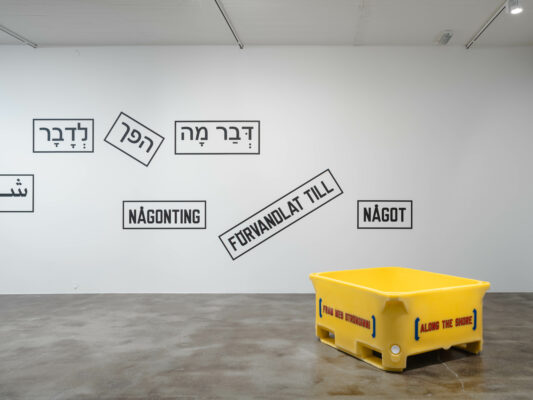 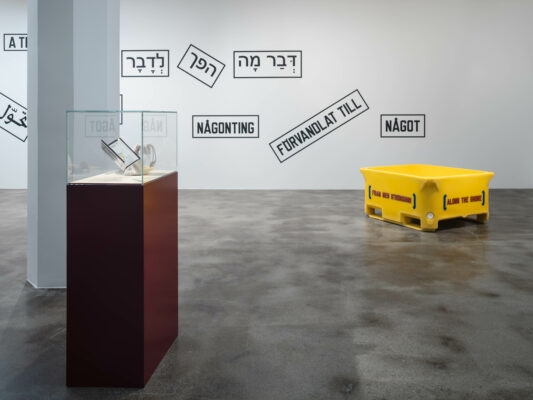 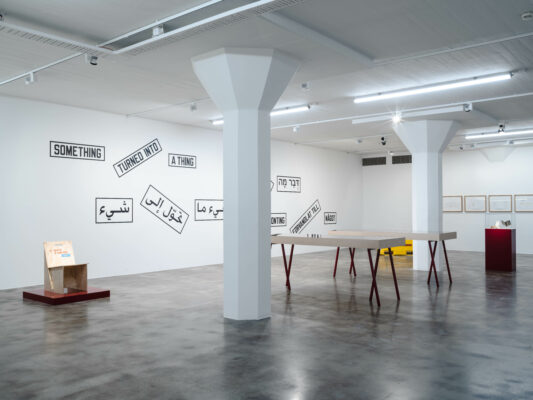 Lawrence Weiner (1942–2021, New York, USA) was one of the central figures of the conceptual art scene of the 1960s, during which artists renounced art objects and traditional creative techniques. Representatives of this new movement questioned the nature of art, the materials from which art can be created and the forms of display.

In the late 1960s, Lawrence Weiner, whose work had previously included painting, sculpture and performative acts, shifted his focus onto linguistic sculptures. Language took on a palpable role, as did the material and context in which the works were displayed. Transitioning from sculpture in the traditional sense to a type in which language partly constitutes the material, Weiner aimed to discover the contexts through which his work could reach a wider audience. This was the logic behind him presenting his works in a series of varied contexts in no particular order of hierarchy. His sculptures found a common ground both in the public space and on industrially produced postcards and manufactured objects with a wide (and cheap) distribution.

In his work, Lawrence Weiner exploited the multifaceted dimensions and connotations of language. Nevertheless, he claimed that he fundamentally worked in sculpture, rather than poetry or literature. Weiner held that through parsing and interpreting what we see, we can individually shape sculptural concepts. By poetically and playfully deranging linguistic expressions, he sought to unchain the fixed meanings of words and, by extension, to foster an awareness of our own attitudes towards the world around us.

Nearness to the sea is often depicted in Weiner’s work. The nautical references and symbols he employed suggest navigation and unbroken movement. The current one-man exhibition takes as its starting point works that variously elucidate the concept of being adrift, and jointly how we navigate the world through language and context. All the works are from the Magasin III collection.

During the exhibition period of Focus: Lawrence Weiner, a series of references will deep dive into Weiner’s artistry through the practice of other artists. The first such reference can be found in our entrance – the work successes, failures and in-betweens (2012) by artist Meriç Algün (born 1983 in Istanbul, lives and works in Stockholm).

Lawrence WeinerAS LONG AS IT LASTS2013