Truly large-scale painting has always fascinated me; I’ve worked with it previously in my role as a curator, for example with Leonard Forslund’s project Subject and Dedication MCMXC, which he created for Magasin III in 1989. My interest in Pablo Picasso’s Guernica, though, has just as much to do with the work’s journey and the story of how it came into being. I saw Guernica for the first time in the early 1970s at MoMA, New York, and I still remember today the impact its incredible energy had on me. Aside from the painting itself, I marveled that Picasso had created this work in just three or four months in 1937 as a protest against the incredible abuse the people in the city of Guernica in his homeland were suffering. Since my first experience of the painting, I also became interested in how the painting has traveled around Europe and North America. It was displayed in Stockholm on two occasions, first in 1938 at Liljevalchs and then in 1956 in the old military drill hall that later came to house Moderna Museet. For the latter, it traveled by train to Central Station and was driven on a flatbed truck to Skeppsholmen. Showing a work that was 20 years old yet still contemporary, not to mention owned by the artist himself, marked a new attitude toward presenting art in Sweden.

After many years of complicated negotiations, the painting left MoMA in 1981 to travel to a newly-democratic Spain. A resident of New York at the time, I followed the drama in the American media with great interest. For this shipment, which took place just 25 years after the painting was driven on a flatbed truck through Stockholm, a Boeing 747 was chartered, flanked by both American and Spanish fighter jets. The journey was reported on in detail, even internationally.

For many years, I thought it would be interesting to invite an artist to create a piece with the same measurements as Guernica, 3.49 x 7.77  meters, with the scale as the only requirement the artist needed to follow in completing the task. When Magasin III Jaffa opened in Tel Aviv, I had the feeling this would be the right place to present such a work. I decided to ask Danish-Israeli artist Tal R—a fantastic artist with many modes of expression at his disposal who dares take on the tradition of painting. He and Magasin III have a long-established relationship. I remember first hearing about Tal from Markus Lüpertz, who had spoken enthusiastically about his painting, but the first time I saw his artwork must have been in the exhibition Nordic Nomads at White Columns in New York in 1998. When Richard Julin did the exhibition Old Confused at Magasin III in 2009, I had the opportunity to truly immerse myself in Tal’s practice.

Tal received the request via telephone on August 4, 2018, and I could tell that he liked the idea and, not least, the challenge. Before and during his work on Natten (The Night), he talked with Daniel Richter, Peter Doig, and Jonathan Meese about what it meant to work with paint on this scale. In addition, he created a series of woodcuts alongside the painting—these should be seen as close studies rather than prestudies. By sketching and working with woodcuts, he could immerse himself in the anatomy and movements of horses, how these can be described in painting, and how to capture the feeling of falling. During the process, we spoke on a weekly basis. In the beginning, we talked mostly about practical aspects, such as arranging a space suitable for working with such a large canvas. But we never talked about motifs; he didn’t want me to know. I didn’t get to see any part of the painting until Tessa Praun and I visited the studio in June of 2019. The painting looked different then from how it does today; the darkness came later. 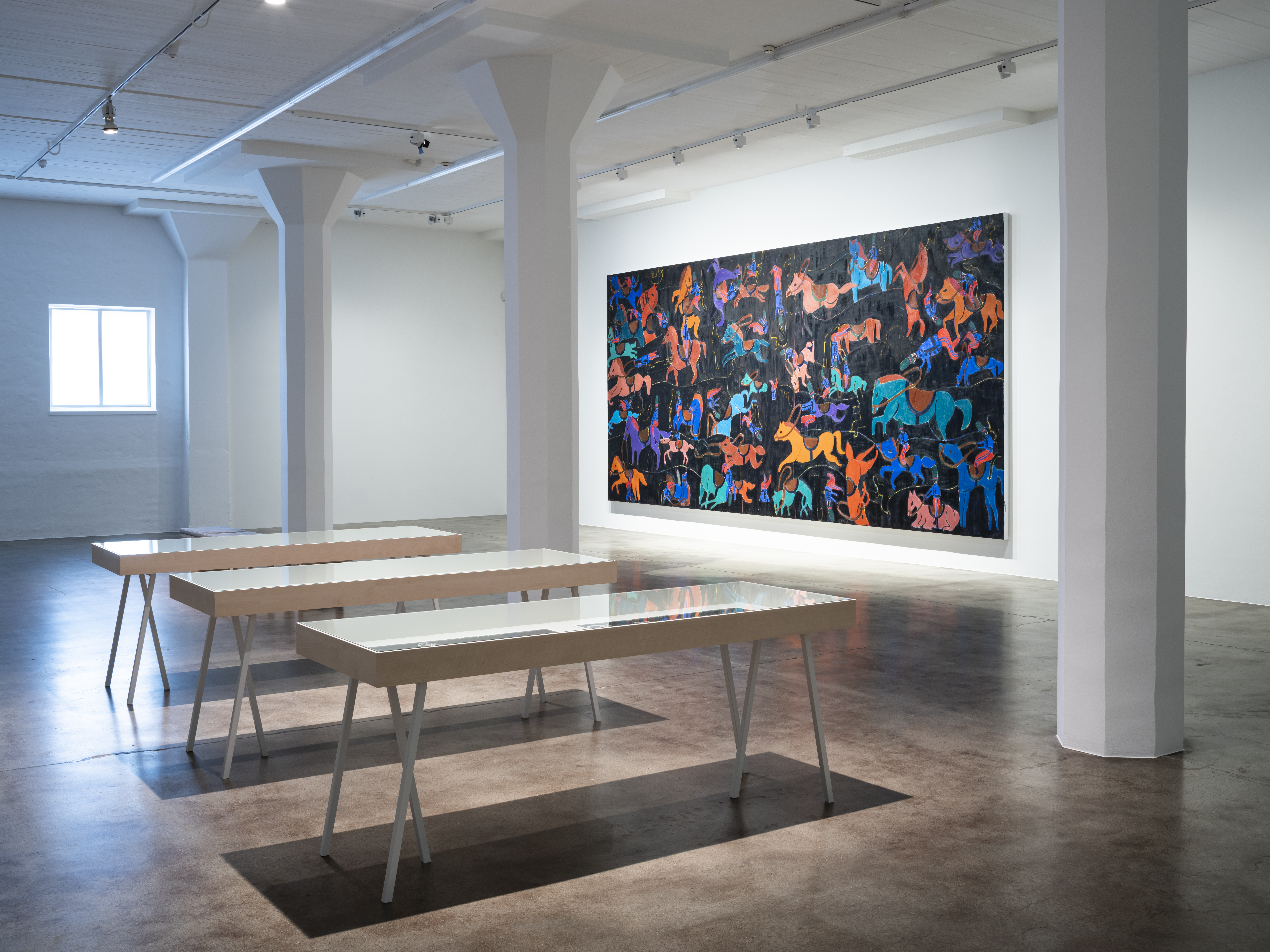 Artworks by Tal R in the collection