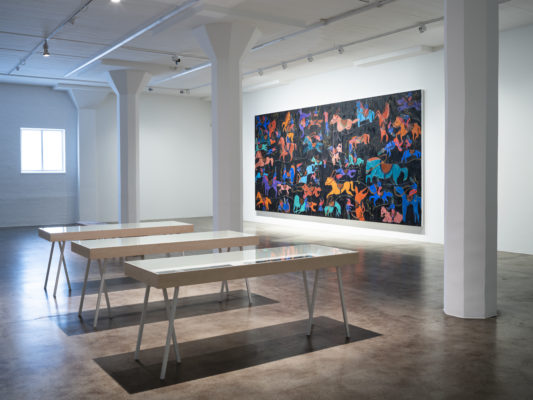 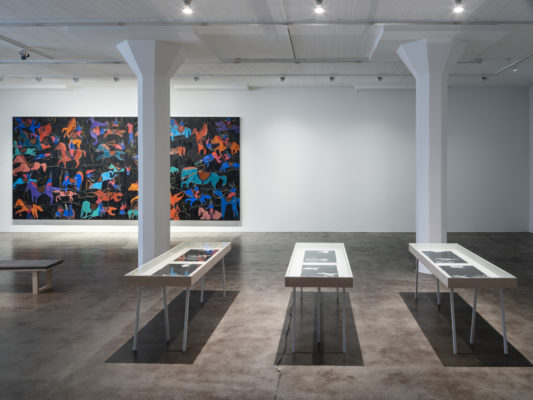 The painting Natten (The Night) (2019) was created by Tal R as a commission by Magasin III, and with the intention to be presented as the only artwork in Tal R’s solo exhibition : Men Who Can’t Sit on Horses at Magasin III Jaffa, Tel Aviv, from October 2019 to March 2020.

Tal R is known for his bold use of color and vivid imagery. Throughout his work, we find references to art historical genres such as Expressionism, Fauvism, and Symbolism, as well as the influence of Naïve art and children’s paintings. His ability to unite these two worlds results in a distinctive visual idiom that is expressed not only in painting, but also in a variety of other media such as collage, sculpture, installations, sketches, prints, and furniture.

Tal R was invited by David Neuman (co-founder, Emeritus director and chairman of Magasin III) to undertake the project of creating a painting specifically for the exhibition space in Jaffa. Deriving from his fascination for Pablo Picasso’s iconic work Guernica from 1937, Neuman asked Tal R to make his painting in the same monumental format: 349 x 777 cm. Guernica’s poignant background and motifs, as well as its symbolic value and political impact have reached far beyond the context of the art world. The commission, however, was not intended as a commentary on Guernica. In the request to Tal R, the format was the only framework given.

Natten (The Night) depicts a cavalry with bolting horses, whose riders are in various stages of falling. The painting reveals a nighttime scenery, where only the contours of the landscape may be perceived. Men in colorful uniforms are portrayed in various degrees of lost control over the animals and the situation they are expected to master—a motif that holds both humor and gravity. Tal R gives no further explanation for his choice of motif. For him, it is important that any possible interpretation of the work occurs in the encounter between the painting and its viewer. Only the investigation of falling as a phenomenon has been described by Tal R as important and recurring throughout his work with the painting. The act of falling may involve not only a fear of losing control, but also the possibility of rising, if control has already been lost.

Natten (The Night) is on view together with a series of woodcuts, close studies of the painting’s subject matter. 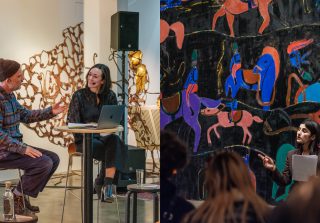