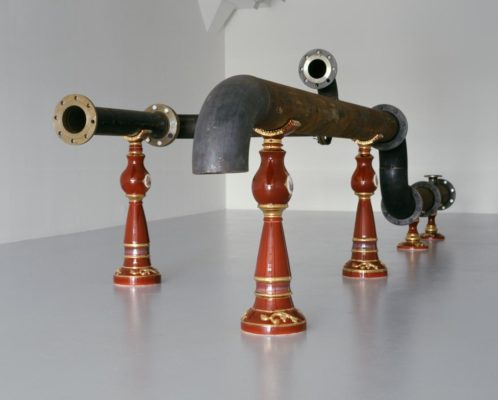 Basically I just want to use an object that, when decorated, would become unreal. Concrete mixers versus ornament, rough versus refined, labour versus leisure.   Wim Delvoye

Wim Delvoye revels in creating collisions between vastly different aesthetics. In strict opposition to the “form follows function” principle, he adds ornament to purely utilitarian objects. Cement mixers are encrusted with Baroque arabesques and life-sized sculptures of construction equipment, such as dump trucks and front loaders, are rendered in lacy Gothic filigree patterns.

For Chantier V Delvoye raises massive pipes, usually hidden underground, up onto fragile porcelain baluster pedestals. This mismatching of materials, a curious juxtaposition of the feminine and masculine, confuses the reading of the sculpture by turning all cultural codes upside down. Raw steel is a familiar material in Minimalist art, an anticipated choice in contemporary sculpture, but the ornate pedestals with 18th century French scenes of courtship by the likes of Jean-Honoré Fragonard are distinctly decorative. The laws of physics and aesthetics tell us that such heavy pipes have no place there, but somehow this precarious balance results in an unexpected equilibrium.

Artworks by Wim Delvoye in the collection