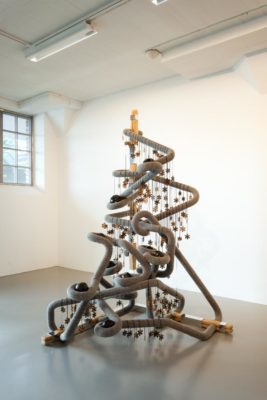 In the mid-2000s, Siobhán broke away from her focus on meticulously smooth surfaces. She felt she had reached a natural conclusion in her efforts to reduce her visual language to the furthest possible point. Reversing course, she began to incorporate the natural materials—wood, fur, wool—that she had so long avoided due to their capacity to harbor “cultural and historical memory.” Snow Seared characterizes this turning point in her practice.

I have never wanted to make work about a political situation, growing up in Belfast with the trouble… I’m more than the sum of those media images. But I guess, unless you keep a very clean mind, this stuff filters through into your bone marrow.   Siobhán Hapaska

The coconuts can be seen as stand-ins for human beings. In the earlier work Playa de los intranquilos (2004), the artist subjected coconuts to terrible acts of genocide. She arranged coconuts in front of a screen upon which they “watched” a video of other coconuts being hacked to pieces: images of their own destruction.

In Snow Seared, the coconuts appear to inhabit a calmer world, nestled in the looping limbs of a fantastical Christmas tree-like structure. But this is a troubled calm, for dangling from these limbs are charred snowflakes: “seared snow,” a grim contradiction in terms that elicits numerous associations. 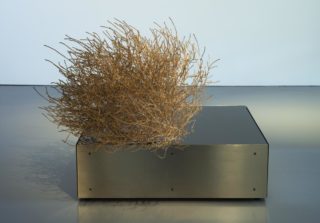 Artworks by Siobhán Hapaska in the collection

Siobhán Hapaskalight lives in a box2012