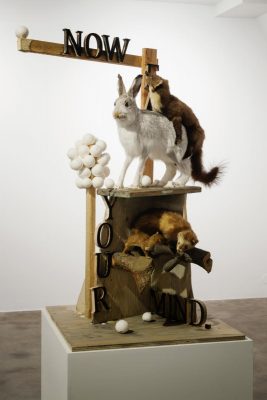 When I contacted Jake & Dinos Chapman with the idea of exhibiting a group of works they had done in recent years alongside a selection of Francisco Goya’s Disasters of War (1810-1823), their response was quick and enthusiastic. Via email, the brothers suggested a rough sketch for the exhibition based on available works, but then Jake Chapman came to Stockholm and we brainstormed completely new ideas together. When it had been arranged that we would actually be able to show the work The Sum of All Evil (four glass showcases from 2012-2013 in which an inferno of atrocities plays out in a landscape inhabited by tens of thousands of miniature figures), it became the point of departure for a somewhat airy exhibition. The Chapman brothers otherwise have an affinity for incredibly compact exhibitions, with numerous sculptures and drawings squeezed into the halls. The exception is when the brothers show one of their large showcase works, which not infrequently overwhelm even the most thick-skinned viewer. The shipping crates containing The Sum of All Evil had to be lifted by crane over the balcony and had only two centimeters clearance in the doorways—and that was after we had removed a tall threshold made of concrete!

I still wanted to bring in a little bit of the messiness that characterizes Jake & Dinos’ creative practice and insisted on having the installation with text that we had included in the first sketch. I had seen that for another exhibition, they had placed wooden beams around the room, and on these beams, letters in medium-density fiberboard (MDF) displayed a text they had written. Jake agreed to create a version of the lettered beams for the exhibition at Magasin III—but on the condition that he would create a new sculpture on site that could connect the semi-poetic text with the rest of the exhibition. Those sorts of moments, the chain reactions that occur over the course of a project, are the most exciting! Because the Chapman brothers seldom create site-specific works, and the point of departure for this exhibition was the connection to Goya’s Disasters of War, we hadn’t planned on a newly produced work. It was even more fun that the idea for a new work came up spontaneously.

During installation week, we made sure that there was a variety of leftover wooden pieces and cans of paint ready for Jake to use. He had brought different materials such as Q-tips and styrofoam balls. Before Jake could take off his coat upon his arrival from the airport, he was already asking if there was a store nearby where we could find stuffed animals. Within two hours, Assistant Curator Therese Kellner had accumulated a number of options. Jake selected a ferret, two martens, and a hare in its winter vestments. For a day and a half, he worked to build the sculpture while we also placed the rest of the works. Just a meter or so from where the sculpture ended up in the exhibition, he pitched camp for his Stockholm studio. Jake, who typically talks a mile a minute with a lot of synonyms, juggling associations and ideas into loud laughter, worked with great focus, occasionally looking out over the room where different teams of technicians installed various works. He mounted the last four words of the installation with the wooden beams displaying MDF-text—Now Eat Your Mind—on the sculpture: “It functions as a piece of aesthetic punctuation…you can consider it maybe as a sort of sinkhole at the end of a lot of guttering…the words roll down into this hole which is the last ebb and flow of this diseased piece of poetry which ends up as a sculpture.” The link between the texts hovering over our heads and the rest of the exhibition was suddenly a fact. To our enormous surprise and delight, Jake & Dinos donated the sculpture to Magasin III’s collection! I look forward to being able to work with the piece in completely new contexts and including it in other exhibition projects in the future.

Note: I primarily talk about Jake Chapman in this text because I was primarily in contact with him. Dinos Chapman has recently moved to the USA, and the advantage of working as a pair is that they can be responsible for different parts of their shared practice. It was Jake who came to Stockholm to discuss the project and to be present for the installation, press viewing, and opening. The Chapman brothers’ collaboration is based on an ongoing dialogue in which the works are the result of discussions between two individuals in order to go beyond the autobiographical aspects of artistic creation.

The Nature of Particles2016Read more

Artworks by Jake & Dinos Chapman in the collection