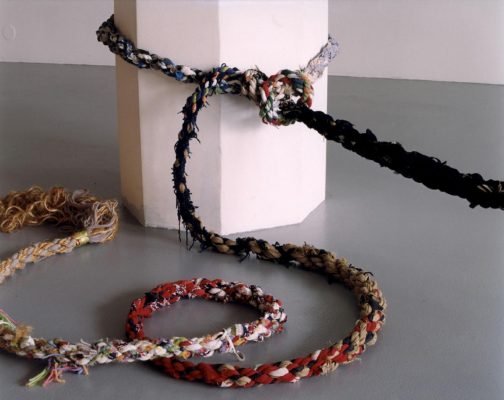 For the exhibition Free Port (2001) at Magasin III curator Richard Julin asked the participating artists to take Frihamnen, the former “free port” or customs free zone in Stockholm, as their starting point. The exhibition explored Magasin III from a historical and site-specific perspective.

Janine Antoni returned to her birthplace, the town of Freeport in the Bahamas. There she asked friends and family to donate an object and to write down anecdotes about its significance. With objects as diverse as cat hair, lace, swimming goggles, shirts, shoe laces and potato chip bags, the artist braided a 78-meter long rope full of stories and memories. The written anecdotes were collected in the book Moor which Magasin III co-published with the contemporary art space SITE Santa Fe in New Mexico. During the exhibition in 2001, the rope was tied around a column indoors and extended outside the exhibition space, over the balcony all the way down to a lifeboat in the harbor.

Moor is a work of art in a state of permanent change because every time the rope is exhibited new sections are added, new life-fragments are intertwined. For the exhibition To be continued… at Magasin 3 in 2007 the rope was extended by 15 meters, and for the exhibition Something Turned Into a Thing in 2012 by 23 meters. 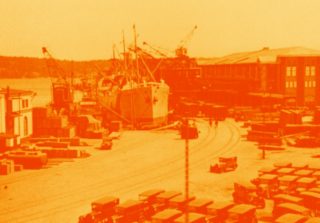 Artworks by Janine Antoni in the collection