Être et Avoir (To be and to have) 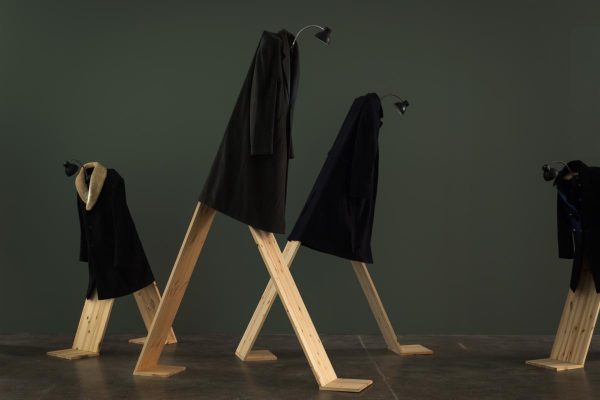 In late January 2008, Christian Boltanski came to Stockholm for an initial meeting with us in preparation for his exhibition at Magasin III. A well-dressed man with smiling eyes, he showed up at our door filled with energetic curiosity. As we walked through the galleries, spontaneous ideas arose about what works should go where. We quickly settled on a layout that built on a sort of choreography in which visitors would enter the exhibition and follow a distinct path that culminated with the new work Être et Avoir.

By the time the exhibition opened in September 2008, sections of the walls and ceiling had been painted black to evoke a sense of fateful circumstance. The specific choreography began with a slowly changing montage of photographs of Christian Boltanski as a child, growing older, and as an adult man (Entre temps, 2005). A single lightbulb hung from the ceiling and pulsed on and off in time with a recording of the artist’s own heartbeat (Le cœur, 2005). Next, visitors passed through a drapery of thin threads upon which was projected an interactive video work that randomly brought together different elements of portraits from obituaries (Être à nouveau, 2008).

The sound work Qui êtes-vous? (2008), along with black mirrors along the walls, served as a transition to the new work Être et Avoir (2008), which Christian Boltanski created specifically for the large gallery on the ground floor. The installation consists of 45 wood figures of varying height, dressed in dark overcoats and with small reading lamps as heads. Approaching the figures triggers a motion detector that plays back statements such as “Jag är nervös” (“I am nervous”), “Jag är socialdemokrat” (I am a social democrat”), or “Jag har fina minnen” (“I have nice memories”). Together, these simple individual portraits reflect a universal picture of what it means to be human.

A colleague and I visited the central warehouse of Myrorna, a chain of secondhand stores, to select coats in dark shades. Other colleagues and friends also donated used coats. Christian wanted the staff at Magasin III to record the phrases he had written for the figures, which had been translated from French to Swedish. It is not important to the experience of the work to know to whom the voices belong. But, for those of us who work at Magasin III, it gives the work an added dimension—it has also become a collection of portraits of us, a kind of archive and a marker of the passing of time.

As beginning or end to this exhibition choreography, visitors had the opportunity to record their heartbeats in a custom-built room adjacent to the café and donate them to a sound archive. The Heart Archive was initiated at Magasin III and was a large-scale production for us. In total, 2,714 visitors donated their heartbeats to the work. The concept Christian, his assistant and I developed for Magasin III has lived on in a number of his exhibitions across the globe and thousands of people have donated their heartbeats. Today, the sound archive is permanently installed on the Japanese island of Teshima as a part of the Benesse Art Site Naoshima, with the continued opportunity to record and donate your heartbeat. Read more about The Heart Archive here.

Artworks by Christian Boltanski in the collection