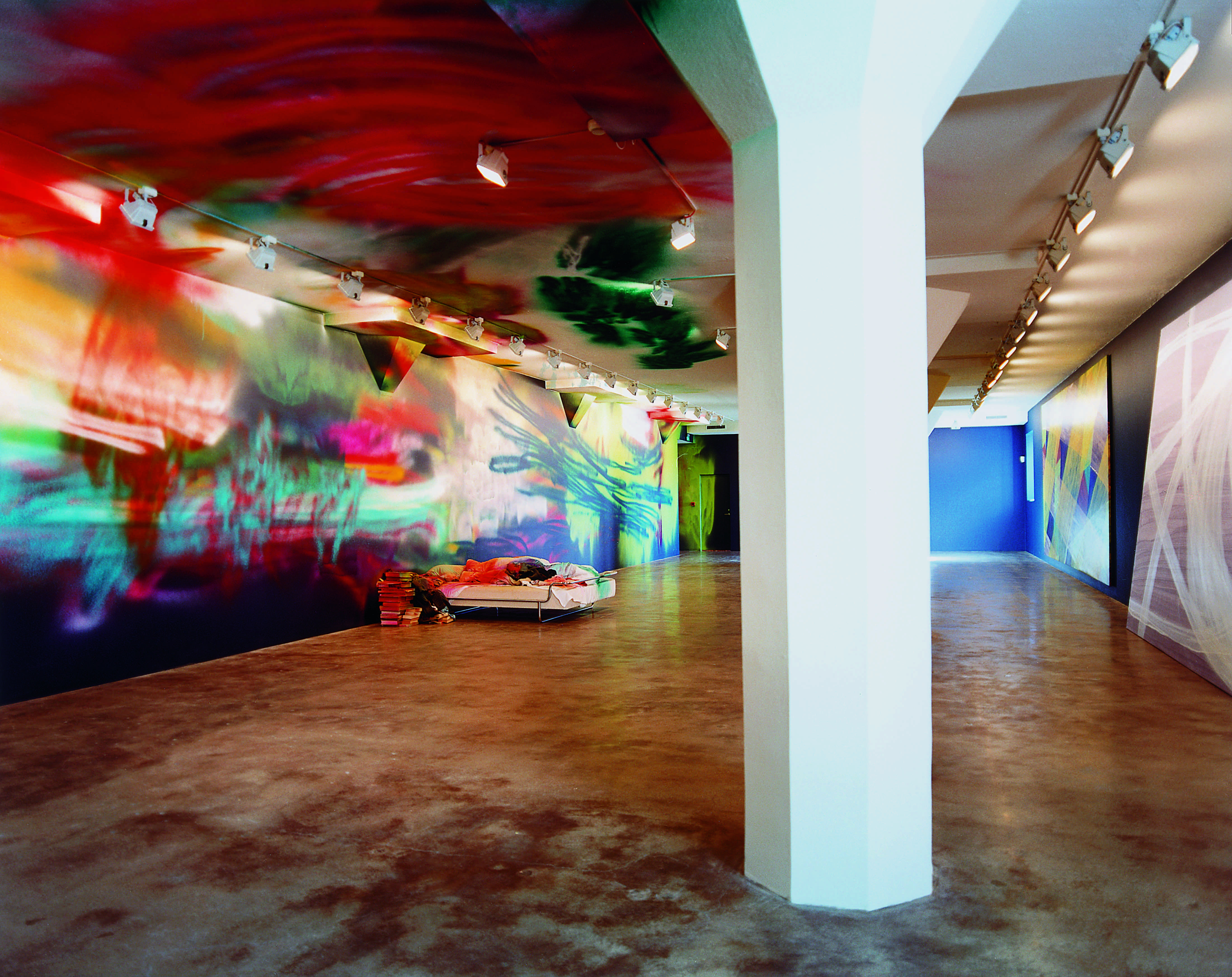 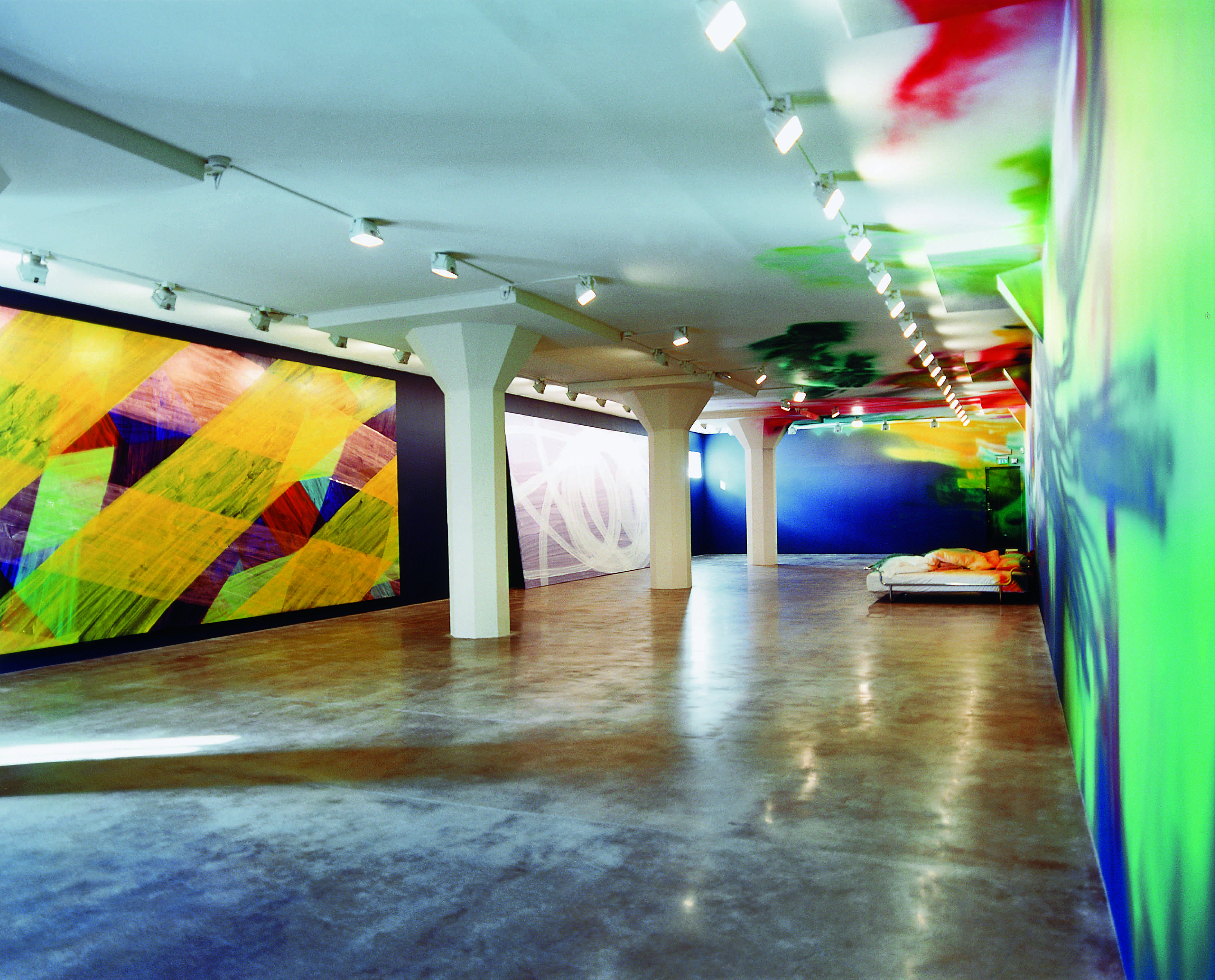 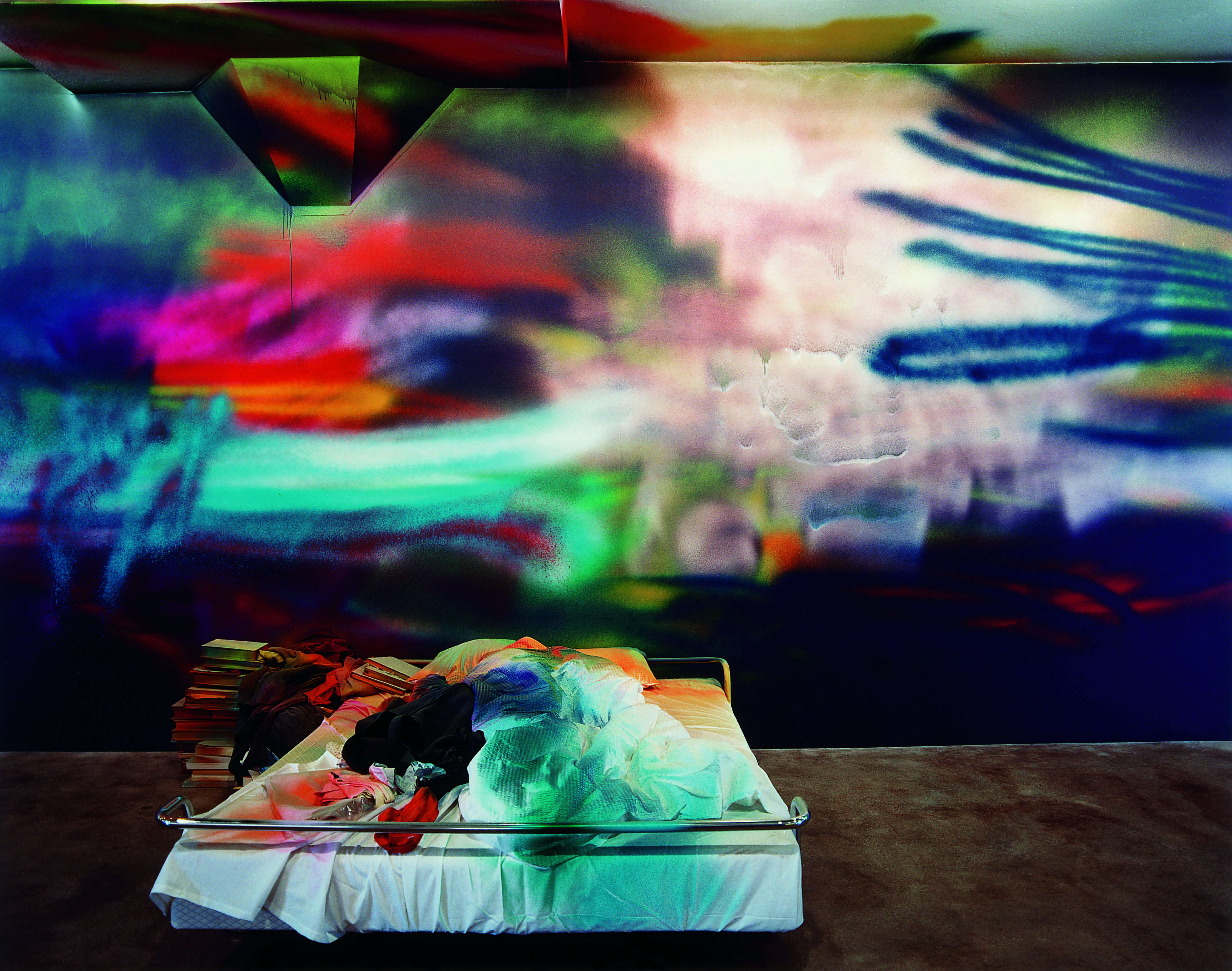 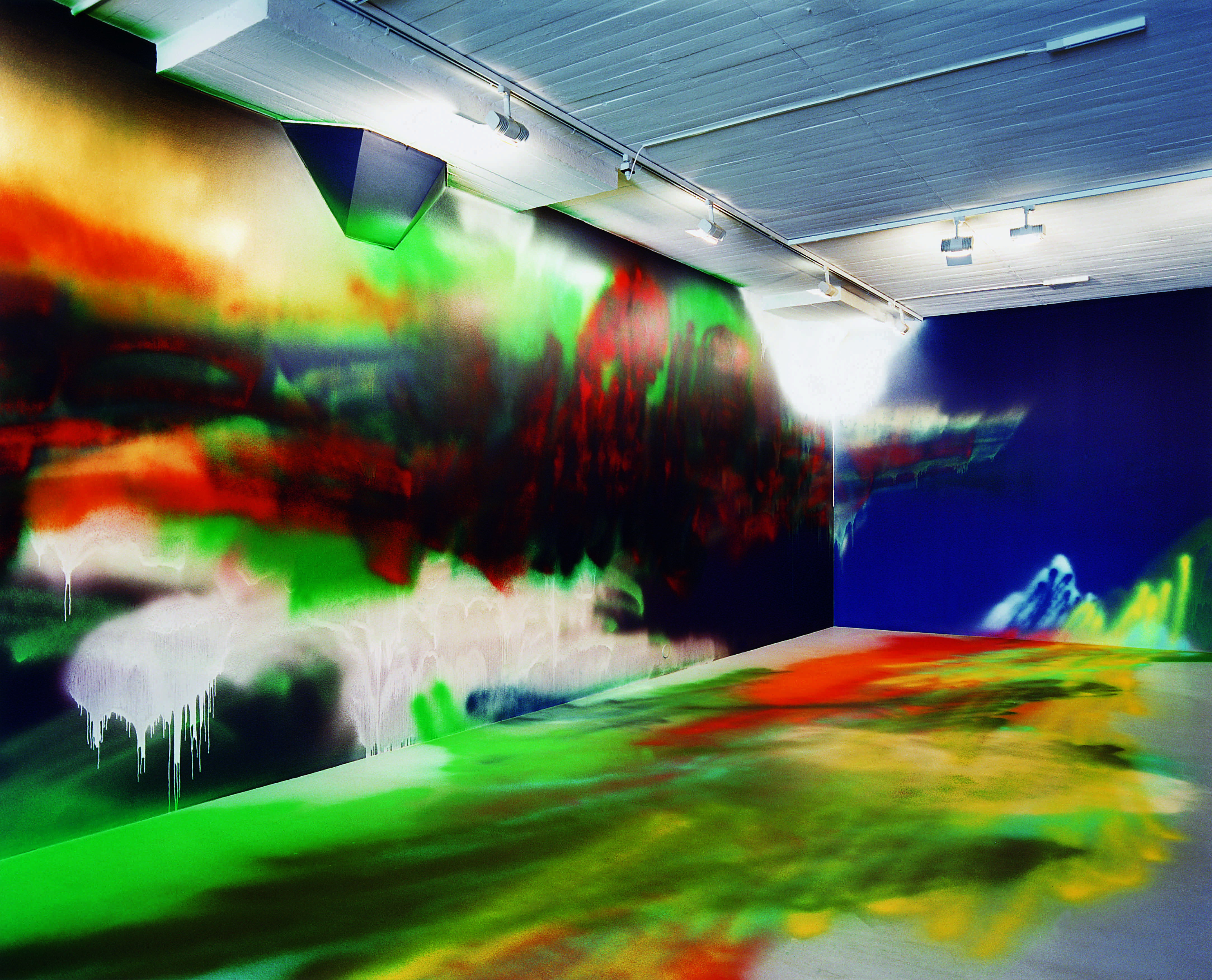 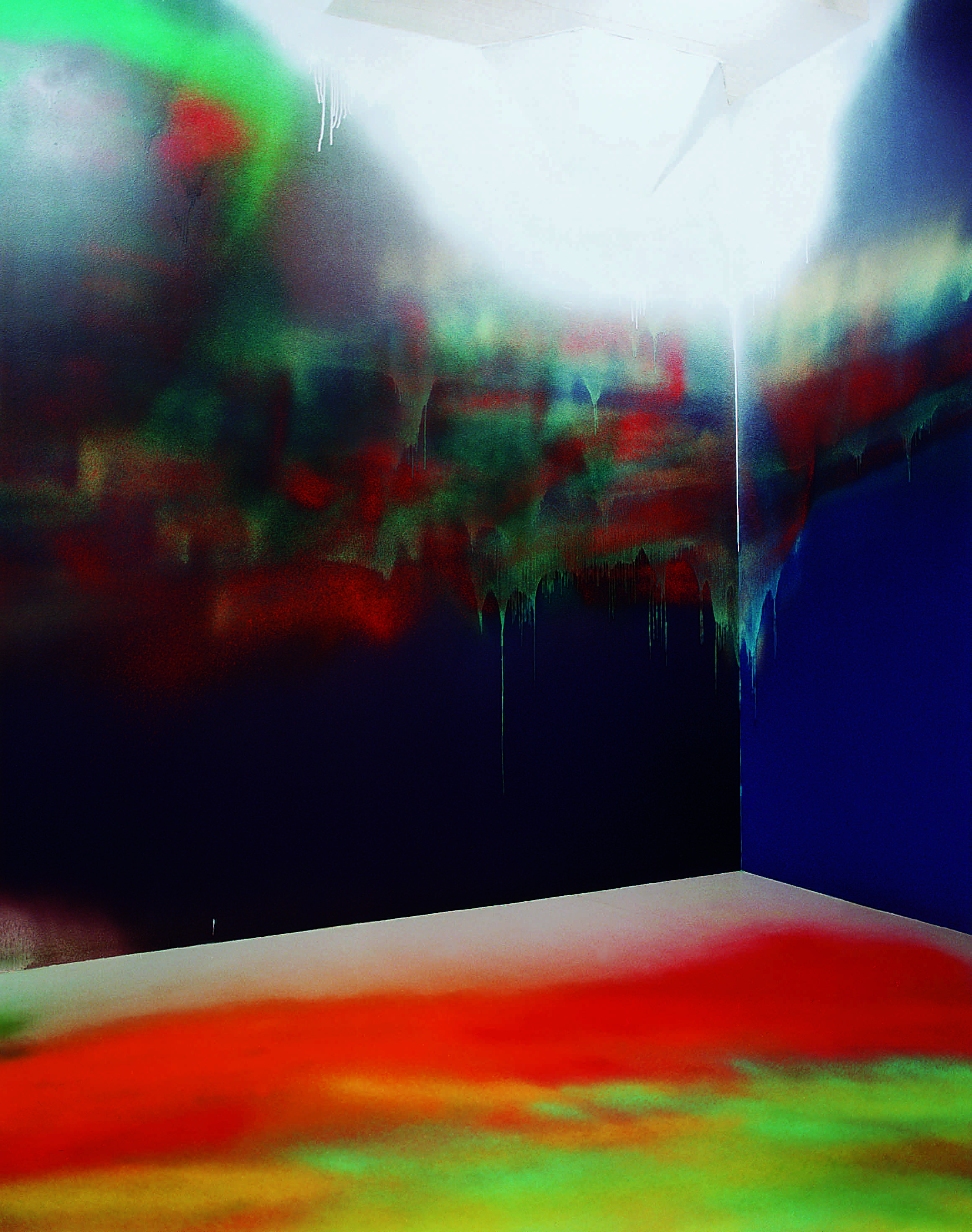 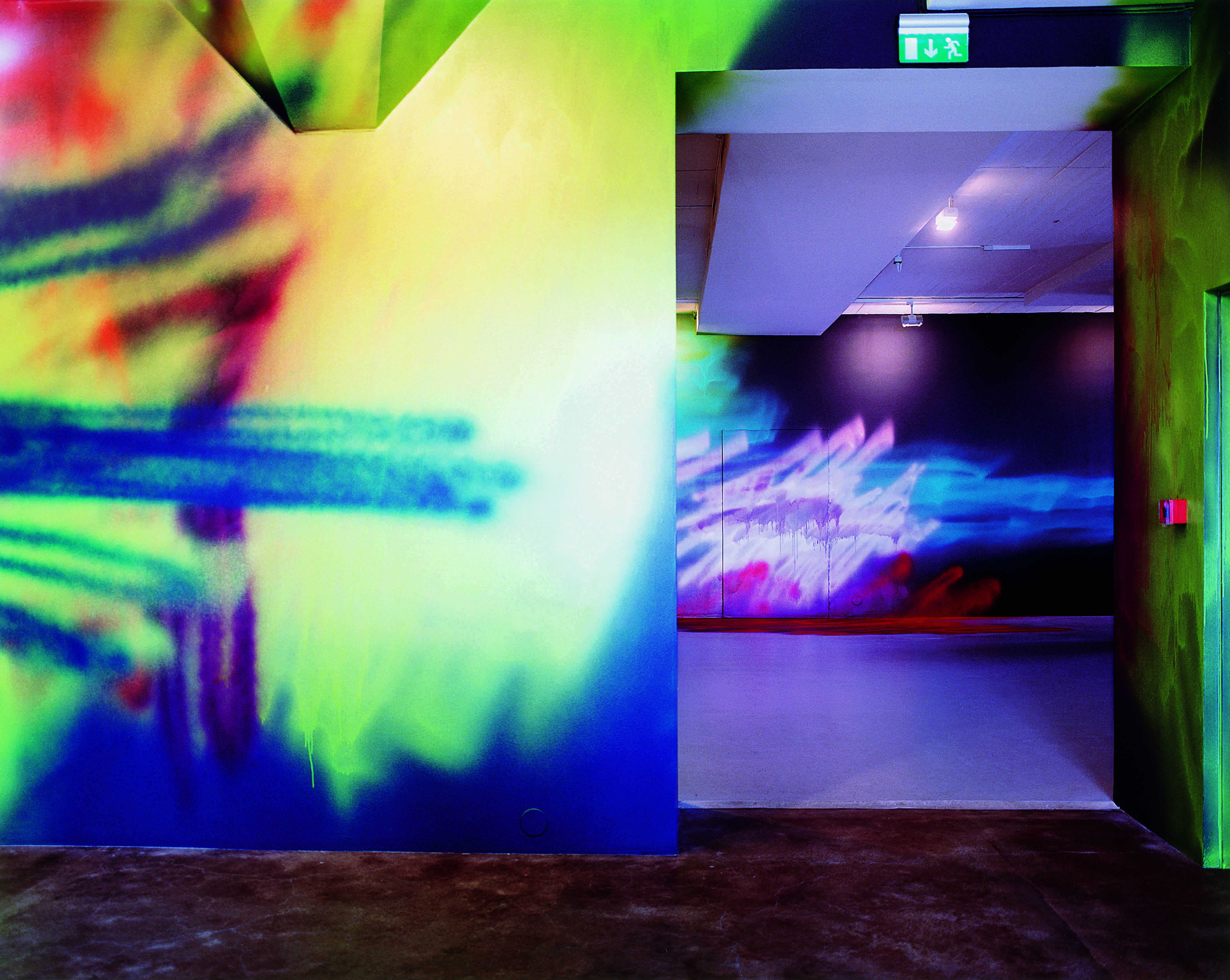 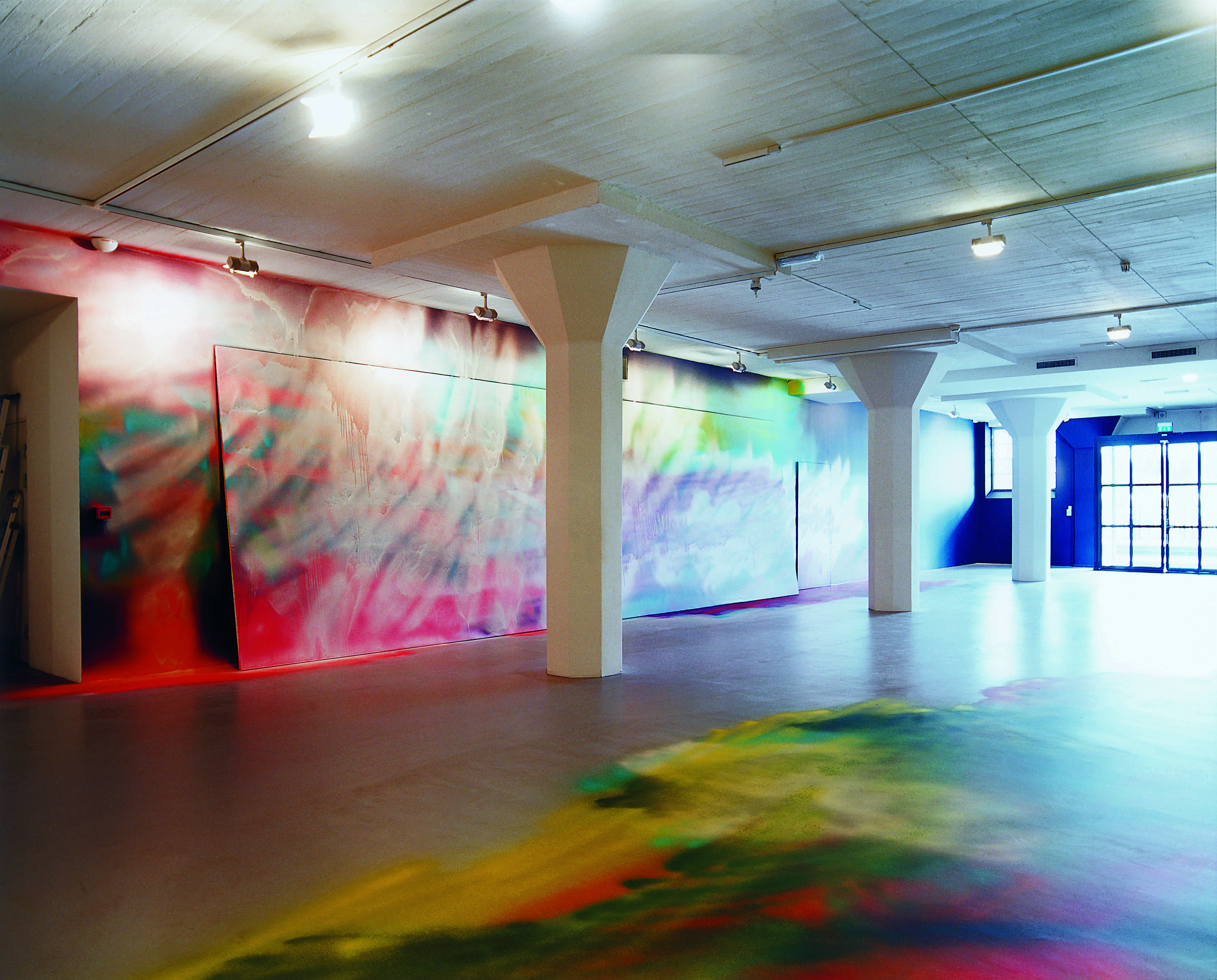 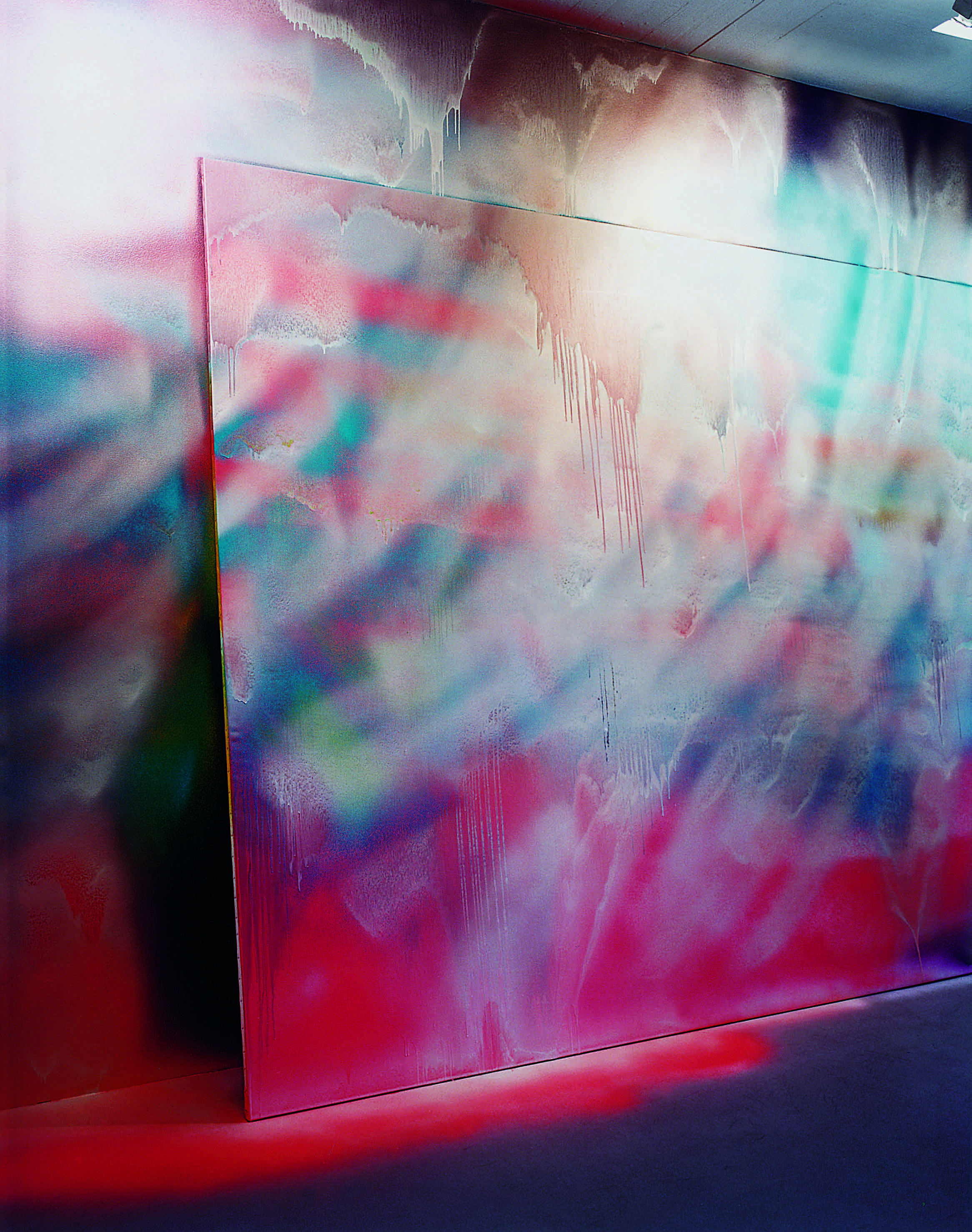 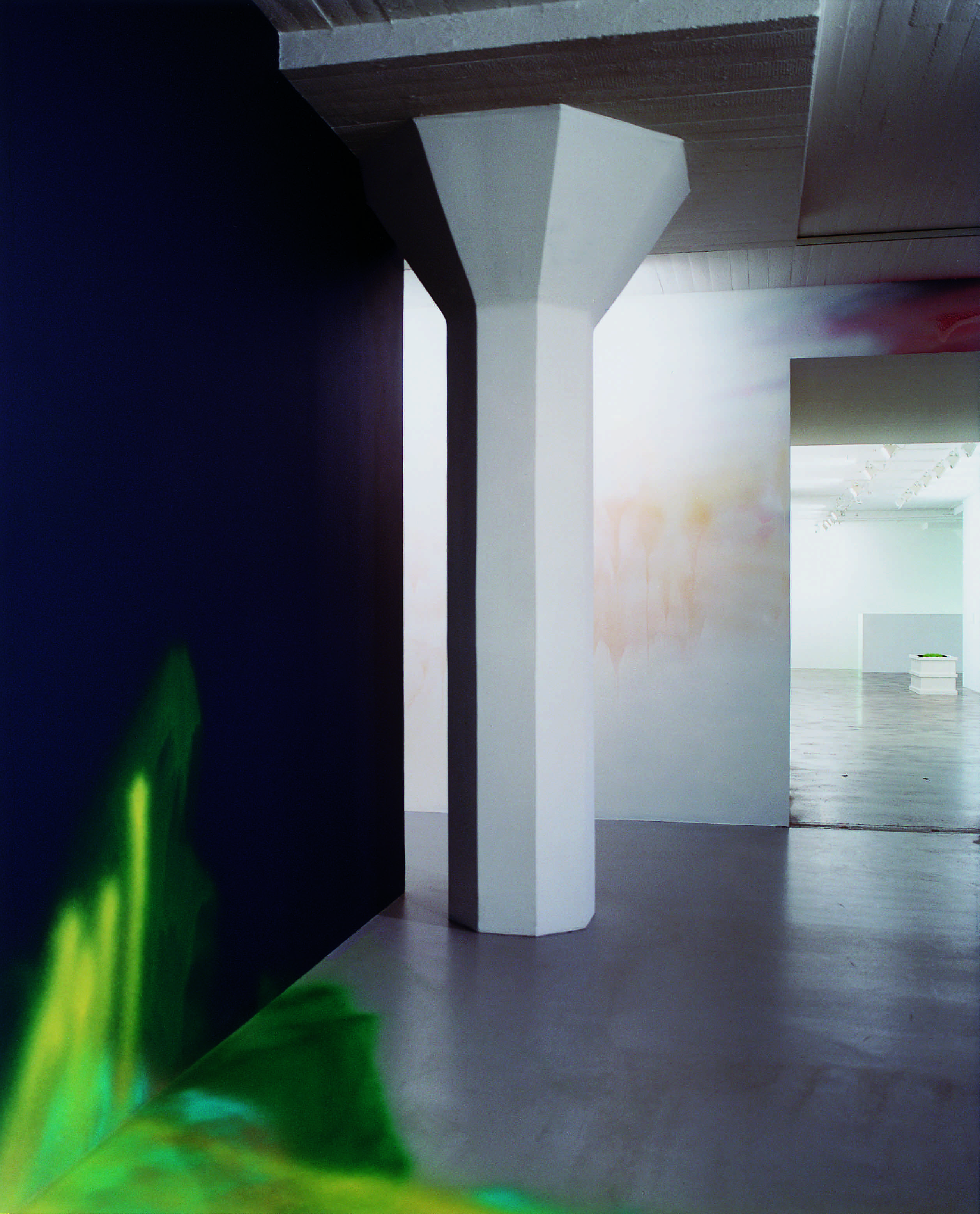 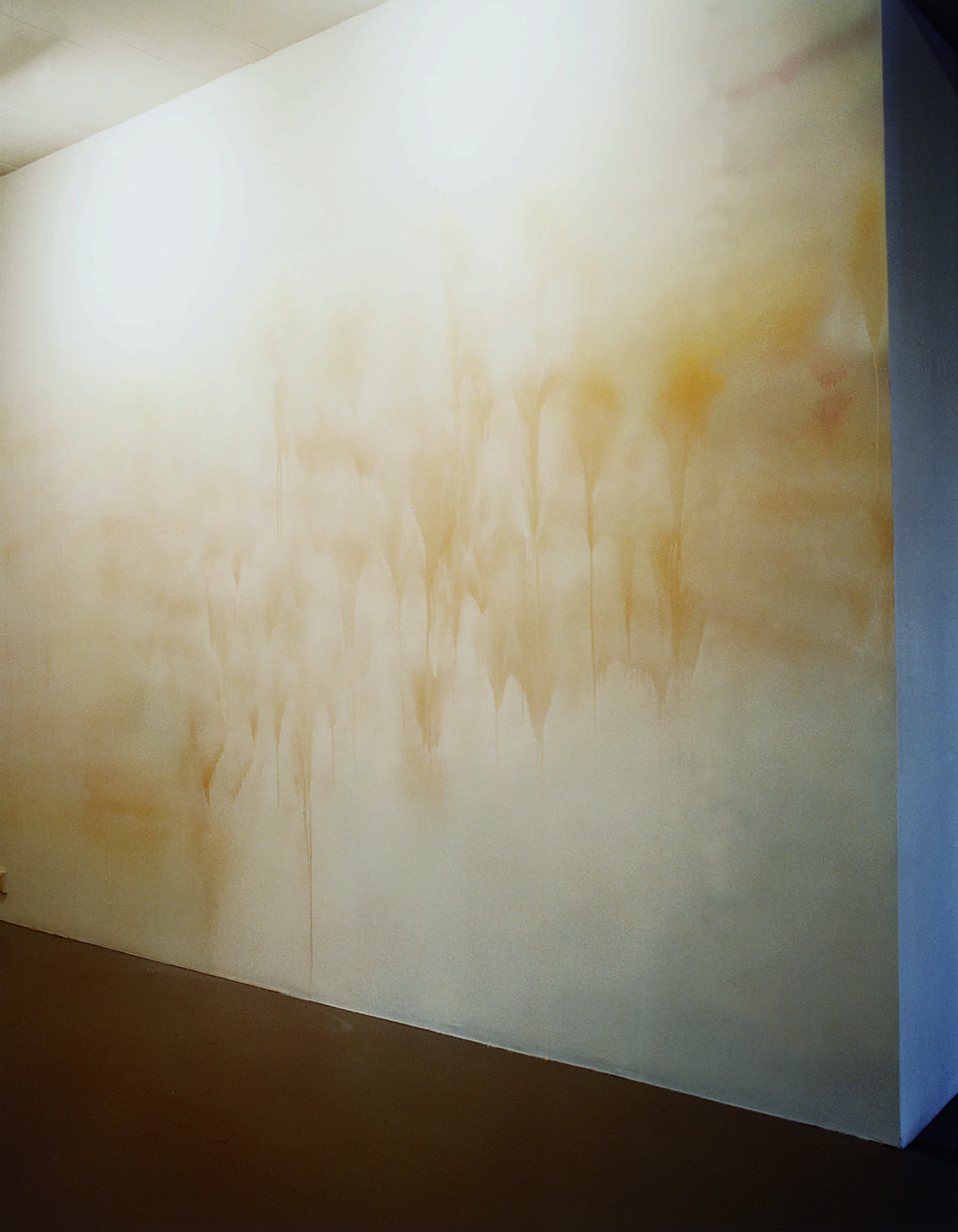 Katharina Grosse makes paintings directly on architecture, in rooms and on canvas. She uses a spray gun for her enormous, non-figurative paintings on walls, floors, and ceilings. Grosse experiences the technique of spraying as a way of dyeing rooms. At Magasin 3 Stockholm Konsthall Grosse occupies two of the exhibition halls. For the very first time, Grosse has incorporated objects into the exhibition space as part of the work – a bed, books, and clothes constitute a part of her paintings. She has also made canvases up to nine meters long for the exhibition halls

Since Grosse paints on site the surroundings, the architecture, affects her work but she doesn’t consider it as site specific paintings in the sense that she uses knowledge about the site where she is working and incorporates it into her work. In new works her main point of reference are previous works and ideas from working on them in a continuous investigation of shape and color. Before beginning her work at Magasin 3 Stockholm Konsthall she decided to use 15 specific colors and made a maquette of the rooms, but it is first in the space, when she has begun working that the painting takes shape. It grows patch by patch, almost organically spreading over the surfaces.

The result involves the whole room and gives a feeling of the movement the work necessitates, of how the paint has dripped, run, and been painted over. Few have seen her works in reality as most exist only during the run of the show and are then painted over.

Grosse relates her practice to the art historical painting tradition, reminding of American Color Field Painting but also other styles and genres as graffiti. Richard Julin, the exhibition curator, states: “While working together, Grosse and I discussed the need for explaining the meaning of abstraction. The title of the exhibition is a commentary on this attempt to understand, or in fact its opposite: allowing the abstract to remain abstract.”

Katharina Grosse is one of the more talked-about artists working today. She first gained recognition for her painting in the 1990s. After working systematically in a more traditional brush-on-canvas technique, she has increasingly shifted to using a spray gun and painting large surfaces. Except interior space she has used a large billboard as her canvas in Auckland in 2001, and in 2002 she painted the facade of Birmingham Central Library. She has moved from using thick paint to spraying thin layers. Today she strives to achieve a less organized expression and sometimes signlike figures appear on the walls. Grosse’s exhibitions include solo shows at the Chinati Foundation, Marfa, Texas, 1999, White Cube, London, 2002 and Kunstmuseum St. Gallen, 2002. During the past year, Grosse has participated in group exhibitions at CASO in Osaka and at Kiasma in Helsinki, among others.

Magasin 3 Stockholm Konsthall is publishing a catalogue available one month after the exhibition opens. The catalogue documents the fascinating process of making the work and how it grew. The catalogue also includes an independent essay by Lars Mikael Raattamaa.