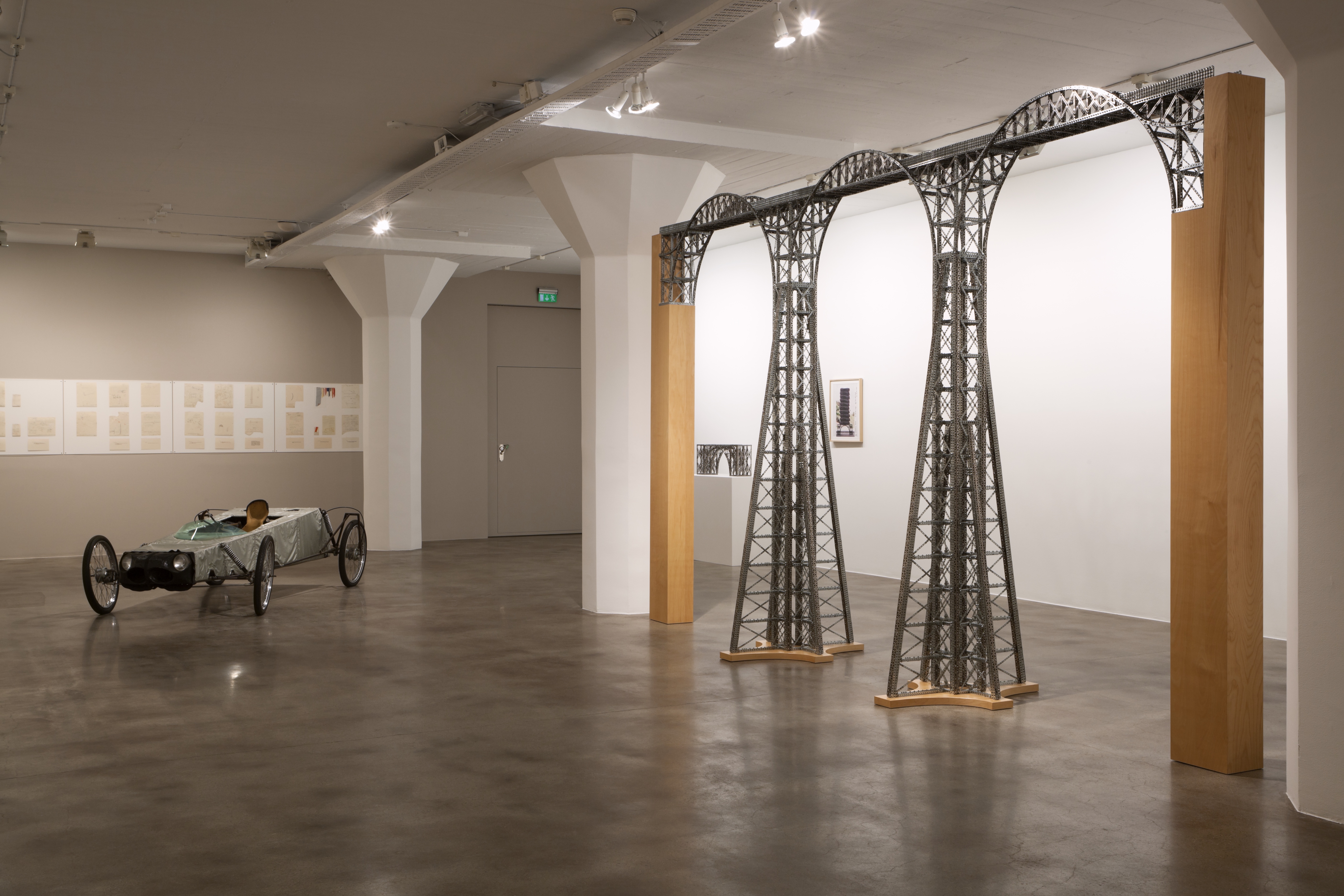 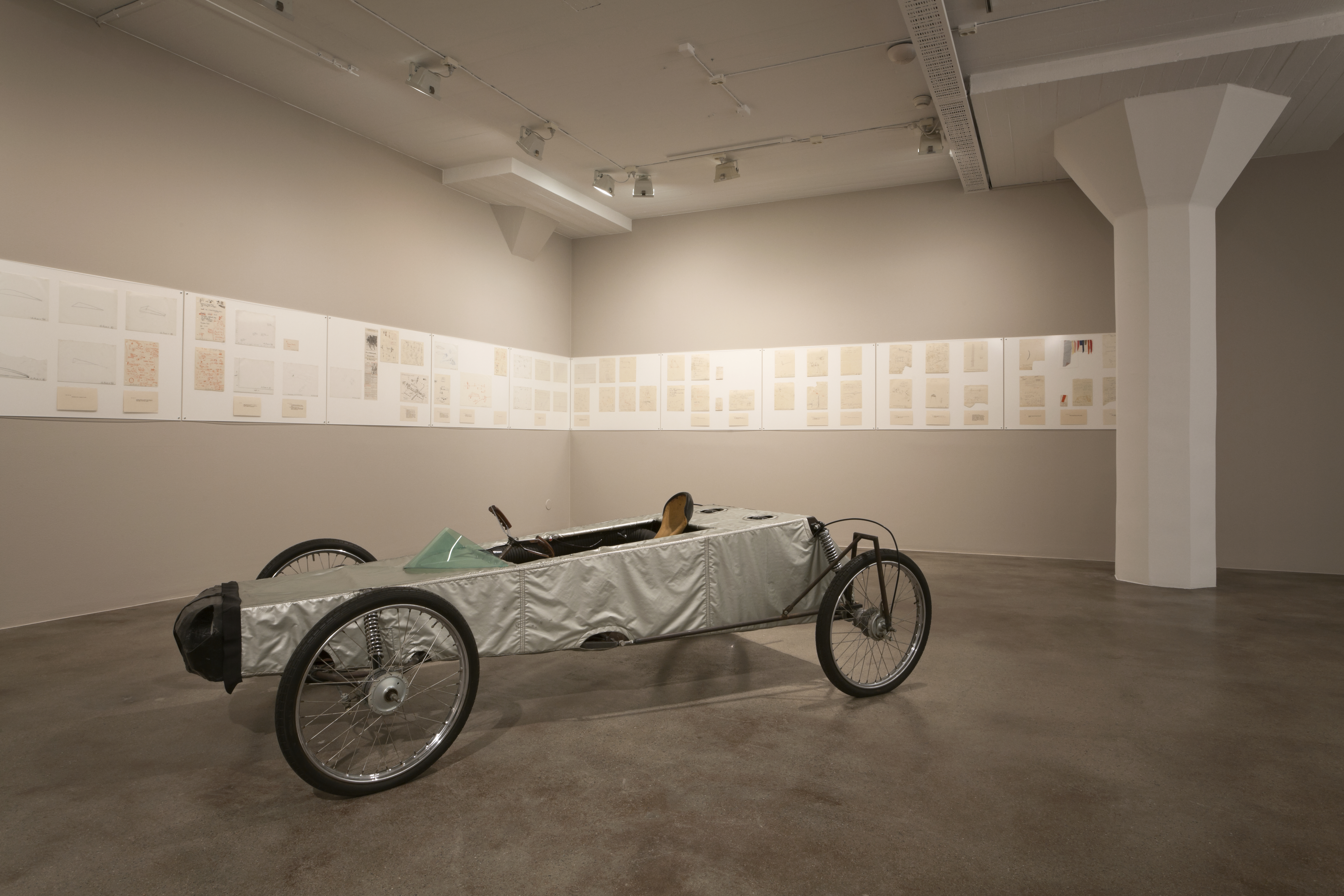 The long-awaited return of key works by Chris Burden, last seen together during his solo exhibition at Magasin 3 in 1999. Each work explores technological solutions for moving the human body through space. In 1975 he designed and built B-Car, a fully functional single-seater car. Most parts were handmade and the design reflects many decisions made during the process. The intention was to build a car that could travel up to 100 mph (160 km/h) and a distance of 100 miles per gallon.The exhibition also includes drawings, photographs and texts that document the project and reveal Burden’s vision of how a car should be.

For his solo exhibition at Magasin 3 in 1999, Burden built four bridges of metal toy construction parts, the first in a series of works to use these materials. Two of these bridges are in the Magasin 3 collection and are now shown together again. The Mexican Bridge is a model of a cast iron bridge designed in the 1860s for the Mexican railroad system to span the Metlac Gorge (1000 foot wide). But the bridge was never built. Chris Burden found a drawing of the bridge in a book about the Mexican railroad and decided to build a large-scale model of it with toy construction parts. Before attempting this project he first designed and constructed ¼ Ton Bridge in order to test the possibilities of the Meccano and Erector Set parts and designed to hold his own body weight. Upon completion he tested it and the structure could in fact hold 500 pounds (a quarter ton), which he documented in the photograph Static Test (2000). The poster for his exhibition at Magasin 3 (1999) shows Burden himself standing on 1/4 Ton Bridge. In 2008 he installed a 20-meter high skyscraper sculpture at Rockefeller Plaza in New York. What My Dad Gave Me included an estimated one million Erector Set pieces and weighed seven tons. Burden’s interest in transportation has continued with his latest work Metropolis II (2010), a miniature city in which 1,100 toy cars travel at a speed equal to 240 mph (386 km/h).

Magasin 3 is delighted to announce the acquisition of Ode to Santos-Dumont, A Work in Progress (2013) by Chris Burden (born 1946, USA). The collage has been made specifically for the second season of his exhibition here in Stockholm, and is part of his latest project. Alberto Santos-Dumont (1873 – 1932) was a Brazilian aviation pioneer. During his years in France at the turn of the last century, Santos-Dumont experimented with designing, building and flying different types of airborne craft. His international renown was cemented when, in 1901, he won the Deutsch Prize for successfully circumnavigating the newly erected Eiffel Tower.

“This project relates to both the B-Car and Mexican Bridge in that it is part of my continuing exploration of engineering, turn of the century technology and transporting a body through space.” – Chris Burden

The collage is made up of material that Burden collected in the process of building a scale model of Santos-Dumont’s airship. The airship, made of aluminum Erector-building parts, will be held aloft by a large helium-filled balloon. A gas engine, built from drawings dated 1901, will power the airship as it circles a more than 13-meter tall model of the Eiffel Tower. This installation will form part of Chris Burden’s large solo exhibition at the New Museum in New York, which opens in September 2013. 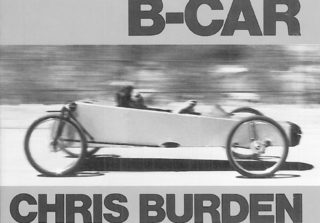