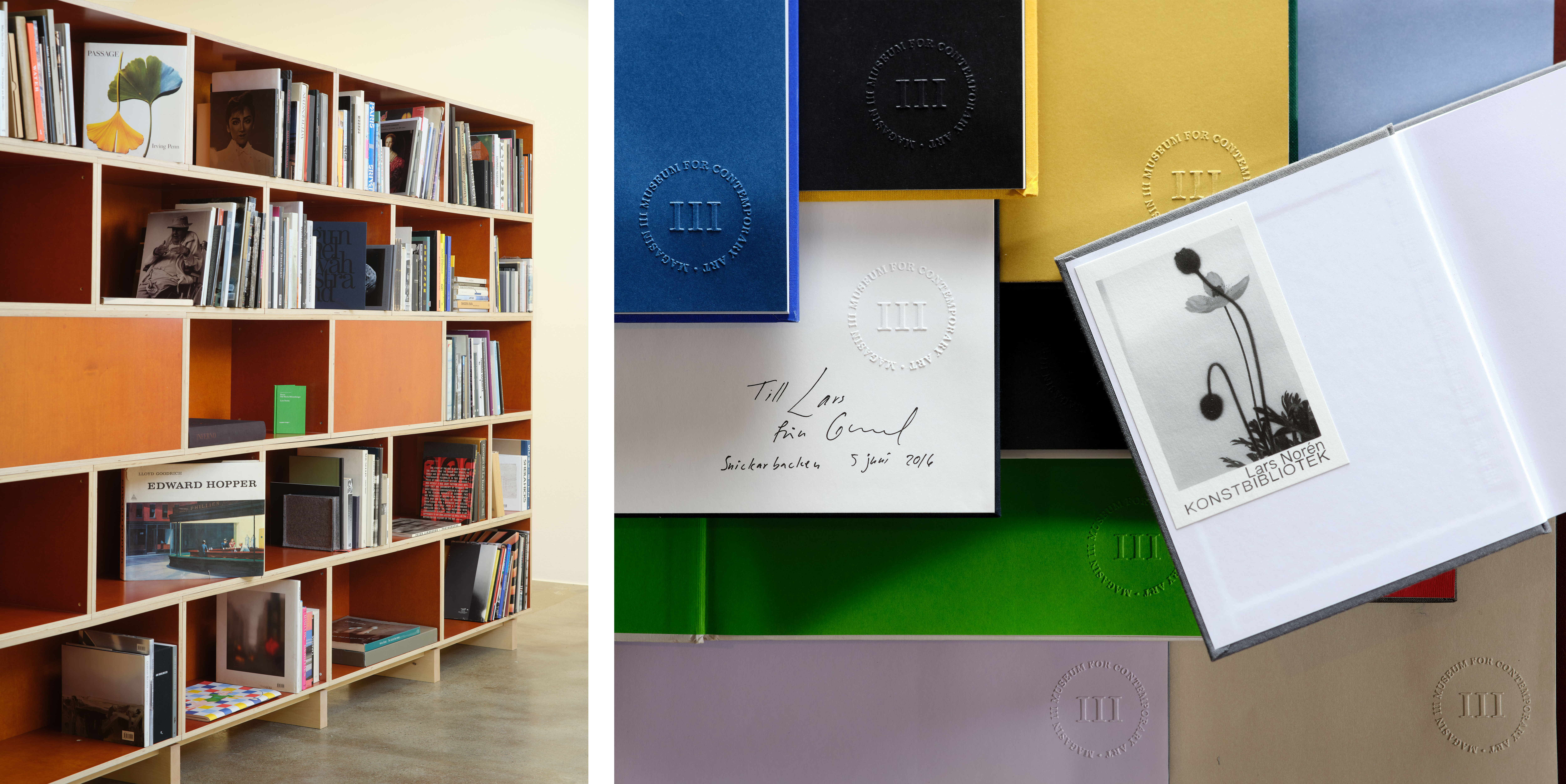 Norén’s Fine Arts Library will be available in our reference library from Friday, May 6. Here, an inquisitive public and future researchers can experience the intentions and impulses that once inspired Norén’s authorial achievement.

Speaking on behalf of the family, I would like to express our joy in the fact that hundreds of art books that inspired Lars in his artistry are now available through Magasin III. We know that Lars valued the work that Magasin III has undertaken for the sake of the arts. So it is particularly gratifying that the collection is now housed there. We expect that Lars’ art books will both delight and inspire many others.

– Nelly Bonner, spokesperson for the family of Lars Norén

As an homage to Lars Norén, Magasin III has designed an ex libris for his collection of art books. Its design is extracted from a motif by artist Gunnel Wåhlstrand, specially created for this purpose.

Norén and Wåhlstrand crossed paths in 2017, in connection with Wåhlstrand’s solo exhibition at Magasin III that year. Lars Norén wrote an equally thought-provoking and insightful essay for the exhibition catalog. In personal, preparatory conversations with curator David Neuman, Norén expressed his fascination with and fervor for Wåhlstrand’s visual world, and not least the importance of visual art for his own creativity.

Opening this library to the general public means sharing one facet of the material that Lars Norén tapped into in his private life, a wonderful treasure of great cultural value. One is bowled over, while leafing through it, by his interests and preferences. The idea behind this art library reflects Lars’ own wishes not to hide anything, but to grant access to anyone interested in learning more about the visual arts or discovering a novel side of a unique and significant playwright.

In connection with the opening of Lars Norén’s art library, we are exhibiting graphic works of Gunnel Wåhlstrand in our reference library. All these works are from Magasin III’s collection, except for the painting whose motif served as a model of the bookplate, which belongs to the artist.

Lars Norén (1944–2021) is among one of the most played contemporary playwrights in Europe and larger parts of the world. He was also a novelist, poet, and director, having directed both his own and others’ plays. His plays often explore relationships within families. In 2003 he received the Nordic Prize and in 2013 the Bellman Prize, both from the Swedish Academy.

Gunnel Wåhlstrand was born in 1974 in Uppsala, Sweden. In 2003 she graduated from the Royal University College of Fine Arts, Stockholm, and has since gotten a great recognition for her large ink-wash paintings. She has been honored with a number of grants from prestigious organizations including The Swedish Arts Grant and the Maria Bonnier Dahlins Stiftelse. Magasin III has had two solo exhibitions with Gunnel Wåhlstrand – in 2006, curated by David Neuman, and in 2017, curated by Bronwyn Griffith and David Neuman.

The general public is welcome to visit the library during our regular opening hours, Fridays and Saturdays between 11 am and 5 pm.