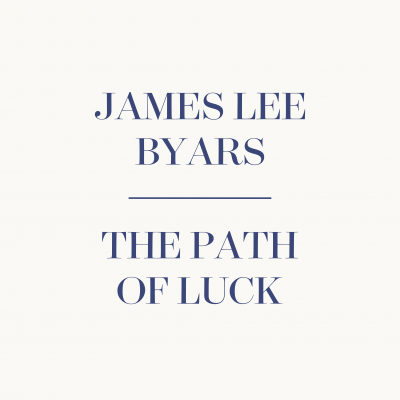 For James Lee Byars, life itself was art and could only be contemplated and treated as such. His art extends to sculptures and installations; works on fabric and paper; and performative pieces, alongside an extensive volume of correspondence and other memorabilia. Through his works, Byars could embrace concepts such as perfection, beauty, temporality, and impermanence, and likewise the effects of time and scale on the viewer.

Byars often used sumptuous materials in his works, such as gold leaf and rare stones. He would even dress extravagantly in a monochrome color scheme to correspond with the materials in his works. He could turn up in public swathed in gold foil or clad entirely in black, sporting a top hat and a veil of black silk.

James Lee Byars was an artist of a nomadic stripe who periodically resided in Berlin, Egypt, the Swiss Alps, Venice, New York, to name a few. Starting in the late 1950s, Byars lived off and on in Japan. There he studied Japanese art, philosophy, and literature and was deeply inspired by both Zen Buddhism and Noh theatre, a form of classical Japanese drama with elements of dance. These experiences aroused his lifelong interest in ceremony, formal rigor, and the fleeting nature of beauty.

Byars repeatedly predicted his own death in his work. Death, as well as the pursuit of perfection, are the thoroughgoing themes in his practice. Through the idea of perfection he himself strove to approach the eternal, while also attaining inner enlightenment, intellectual knowledge, and spiritual experience.

Encased in six vitrines are sculptures in blue African granite entitled Twelve Figures, The Two Figures, The Cross, The Discus, The Square Door, and The Sphere Door. The vitrines are built as replicas of the vitrines recurrently used by German artist Joseph Beuys (1921–1986). Originating in Namibia, the blue granite is more brittle and fragile than other types of granite. But its lustrous royal blue tones and intense veining of white, brown, and occasionally yellow make it a particularly sought-after rock.

The vitrines and objects, which together make up The Path of Luck (1989), can be regarded as embodying Byars’ interest in how beauty manifests as perfection. At Magasin III, The Path of Luck was first displayed in 1992 as the only work in Byars’ solo exhibition, and subsequently in two of the museum’s group exhibitions, in 1994 and 1998, respectively.

The Path of Luck is shown here in dialogue with Maya Attoun’s exhibition Solar Mountains & Broken Hearts. Attoun shaped her visual world based on products and phenomena developed by humans. The works in her exhibition are inspired by a historic volcanic eruption and its impact on nature and man. In form and content, they unfold in a possible future, on earth or in a place unknown to us, and together create an alternative sort of nature, or remnants of nature. Byars, in turn, created his works based on nature’s own materials. The geometric stone sculptures in their slim vitrines also escape being placed in a specific time. They can be perceived as either classical or contemporary, yet with a trace of utopia. Presented like scientific museum objects, they can be thought of as part of symbolic worlds that belong to all the world’s cultures, or possibly in a civilization beyond our horizon of time or imagination.

Maya Attoun’s and James Lee Byars’ works exist separately in their own timelines. Both open up the imagination about the past’s influence on the future, and remind us that nature is bigger than us humans.