Update Required To play the media you will need to either update your browser to a recent version or update your Flash plugin.

The Nature of Particles. English version

Audioguide for the exhibition The Nature of Particles at Magasin III Museum & Foundation for Contemporary Art in Stockholm. The exhibition features works by Jake & Dinos Chapman alongside works by the 19th century artist Francisco Goya.

In the audioguide curator Tessa Praun tells about the background of the exhibition and brothers Jake and Dinos Chapman’s artistic practice. Jake Chapman talks about how he and his brother Dinos began using Goya’s famous series of etchings Los Desastres de la Guerra as a starting point in his oeuvre, as well as about the artworks we see in the exhibition The Nature of Particles at Magasin III.

Karin Sidén, Associate Professor and Director General of the museum Prins Eugens Waldemarsudde and former curator at Nationalmuseum in Stockholm has for many years immersed herself in Francisco Goya’s oeuvre, including Nationalmuseum’s exhibition on Goya in 1994 and in the exhibition From El Greco to Dali in 2003. In the audio guide she talks about Goya’s oeuvre, focusing on the graphic series Los Desastres de la Guerra.

The audioguide is produced by Magasin III in collaboration with Rask Musikdesign, Stockholm, February 2016. 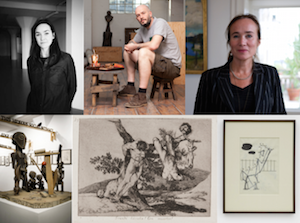