1992
12 strings, each 12.8 m, 504 15-watt bulbs, 6 m extension cord, porcelain holders for lamps. The size varies depending on the installation.
Amount of parts varies with installation. 12 identical light strings, each: white extension cords, 42 feet long, with 42 light bulbs attached, placed at intervals of one foot apart from each other with 20 extra feet of cord at end closest to plug (62 feet total).
Magasin III Production 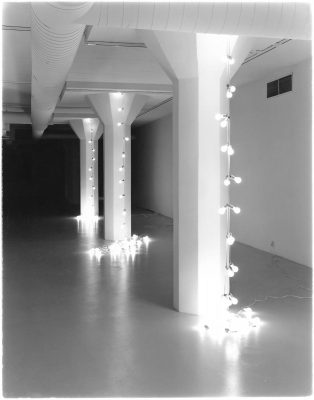 I was living in New York when I first saw the work of Felix Gonzalez-Torres, it must have been in 1989 or 1990. A year or so later, I approached him about doing an exhibition at Magasin III, and I knew that I wanted to include a light string work. He had done a number of them already.

Felix produced works using the most basic elements. The sockets, the wiring, the fittings—these were cheap American-produced parts that he bought on Canal Street in New York. Nothing precious or high-end. He was striving for something so basic, but now those materials have become rarified.

Untitled (For Stockholm) was produced in New York and shipped to Stockholm. It’s the biggest light string piece he ever made: twelve long strands made specifically to fill our upstairs exhibition space. But when we installed it, he realized it was too much. We ended up showing only about half of the strands. In fact, we’ve never shown all twelve strands here in Stockholm.

Felix was very clear about the anti-aesthetics of the installation. It’s tempting to install all twelve light strings for maximum striking effect, but he wasn’t interested in that kind of exaggerated beauty. I have always loved that moment of discovery, of walking into the room, and I didn’t want you to be able to see everything from the door opening. He understood that, and installed the works so that you had to move into the room.

The installation was a simple process. While Felix was positioning the work, he pulled the light strings, lightbulbs and all, along the ground. They made a kind of sweeping motion on the floor, which created a very special sound. I hadn’t realized that a lightbulb is actually quite sturdy. It’s just when you drop it or bang it that it breaks.

When he arrived in Stockholm, he had with him a gigantic jar of Beluga caviar that he had gotten while in Vienna for a gallery opening. We put it in the fridge here at Magasin III and one night we ate it with a spoon.

I had seen the billboard Felix made for MoMA, with the two pillows, and we talked about doing it in Stockholm. He ended up creating a billboard work for the exhibition, Untitled (for Jeff), that was produced here in Stockholm. The billboard shows the outstretched hand of a friend of his who had passed away. It was in the exhibition at Magasin III and also installed on six billboards around Stockholm. Some of those sites don’t exist anymore because of new construction. I regret that we didn’t end up acquiring this work. It’s now in the collection of the Hirshhorn Museum in Washington, DC. 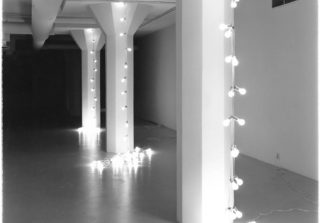