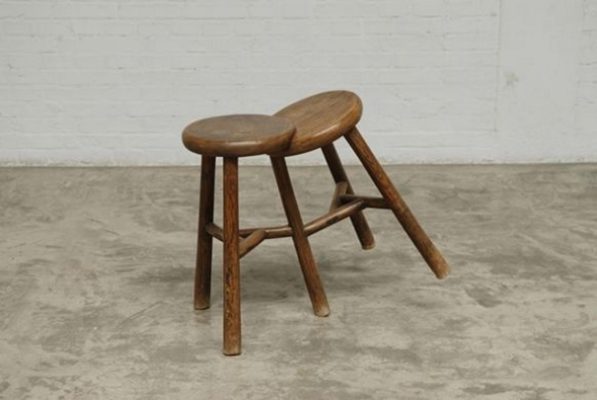 Though grounded in references to China, Ai Weiwei’s work speaks to an international audience by exploring the tensions between juxtaposing elements: old and new, stability and change, control and freedom. One aspect of the artist’s working method is the playful manipulations of existing objects. Ai Weiwei is fascinated by the materials and techniques of traditional craftsmanship, and has a vast knowledge of Chinese antiques. In a series of sculptures Ai Weiwei re-used building materials from old houses and temples; doors and window frames from the Ming Dynasty (1368–1644) were used in new structures. Antique tables, chairs and stools were taken apart and re-assembled into new objects using traditional methods. The original function has disappeared and the new objects have their own inner logic.

Stool is composed of two stools from the Qing Dynasty (1644–1911). The stools have been freed from their original historical value and in the new object functionality and the laws of physics no longer hold. The work is not created from a sense of nostalgia for the past but rather created in order to shake up conventional notions about culture and to question established values. The artist’s actions are a commentary on the often bizarre reality of contemporary Chinese society, with modern China having come about at the cost of the personal freedom of its citizens.

Artworks by Weiwei Ai in the collection