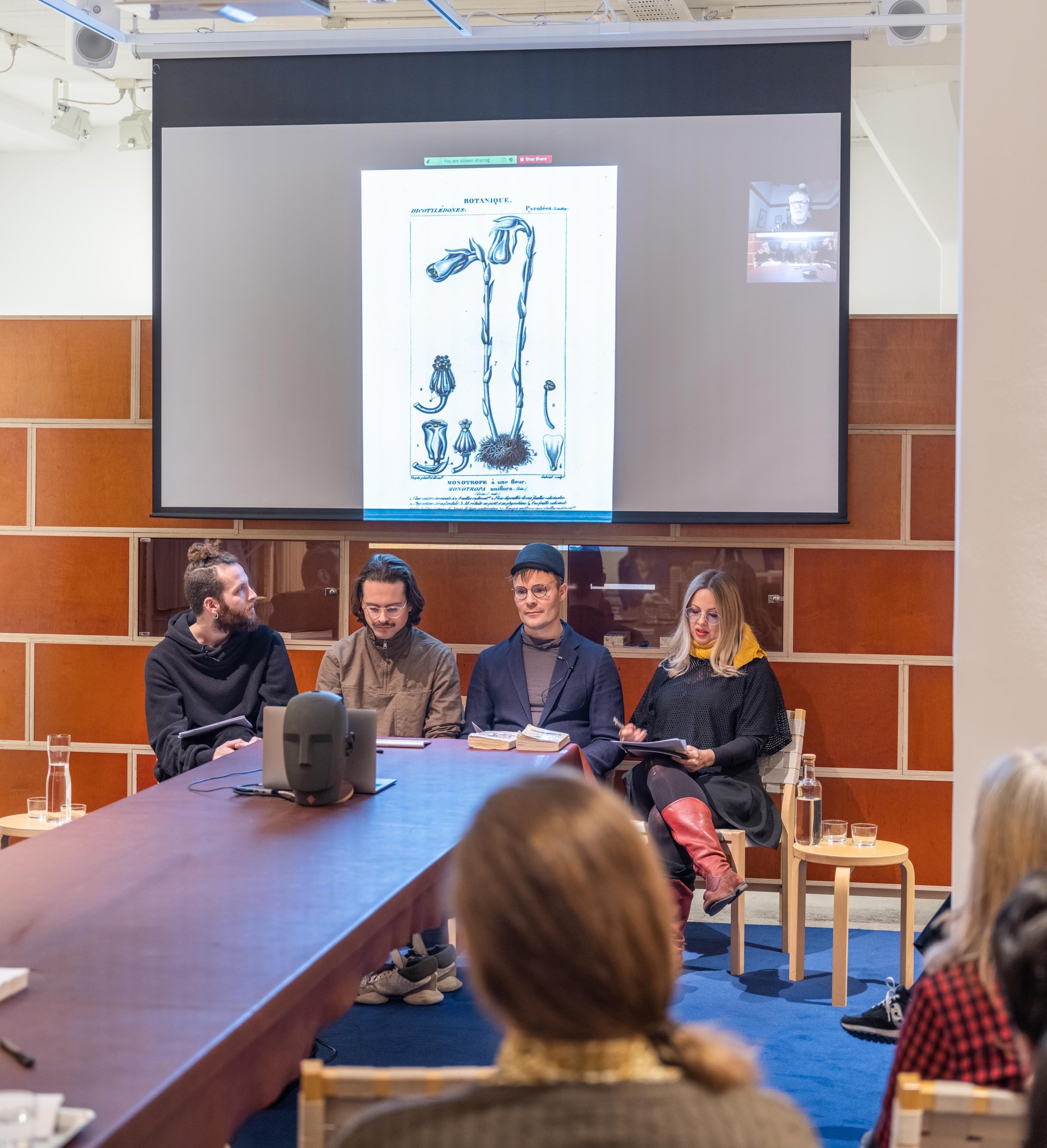 Read more about the series

Session 1
Introduction to the artwork under process: Lundahl & Seitl and Untold Garden studio
With a lecture by Peter Godfrey-Smith
Closing with a Q&A and discussion

On November 24, Lundahl & Seitl, Untold Garden, and a reference group gathered in the library of Magasin III. After the artists’ introductions to the work Garden of Ghost Flowers, which is under process, philosopher Peter Godfrey-Smith gave a digital lecture from his home in Sydney. He explained his materialistic theory on how consciousness ­– defined as the ability to have a subjective or perceptible experience – occurs gradually in organisms; a process that gives rise to states where consciousness is in part present, in part absent.

If the basis for experience is a collection of slowly-evolving abilities that enable animals to sense events around them and adaptively respond, then we have to grapple with the fact that this toolkit has forms in animals with very simple nervous systems, in non-neural multicellular organisms (sponges, plants, fungi), and in unicellular life. Do those creatures, too, have tiny scraps of consciousness? The view seems to lead to a kind of radical inclusiveness.

Peter Godfrey-Smith, Gradualism and the Evolution of Experience, 2020

Lundahl & Seitl, formed in 2003. The immersive art of Lundahl & Seitl is a continuous research into the question of how we perceive reality and negotiate its various forms.

It is a worldbuilding, anti-disciplinary practice of choreography, virtual reality, and architecture – radically repurposing the use of everyday technologies by local adaptation, collaboration, reciprocity, and trust.

Their works and projects have been exhibited in museums and institutions such as the Gropius-Bau / Berliner Festspiele (DE), Tate Britain (UK), Royal Academy of Art (UK), 66th Avignon Festival (FR), Centre Pompidou-Metz (FR), 8th Momentum Biennale (NO), and the Kochi Muziris Biennale (IN). The duo is recipient of a number of awards including the STRP ACT Award 2021, Birgit Cullberg Scholarship, Montblanc Young Directors Award, the Edstrand Foundation Scholarship, and Sven Harry’s Art Prize. They have been Iaspis studio grant holders (1 October 2016 – 31 March 2017). In 2020, they were shortlisted for the Lumen Prize.

Untold Garden is an experiential art studio that explores and builds tools for participatory design and art installations, virtual sculptures, interactive performances, artificial ecologies, and organic social networks. They are based in London and Stockholm and work across the globe.

He has written six books: Complexity and the Function of Mind in Nature (Cambridge, 1996); Theory and Reality: An Introduction to the Philosophy of Science (Chicago, 2003); Darwinian Populations and Natural Selection (Oxford, 2009), which won the 2010 Lakatos Award; Philosophy of Biology (Princeton, 2014); Other Minds: The Octopus, The Sea, and the Deep Origins of Consciousness (FSG, 2016); and Metazoa: Animal Life and the Both of the Mind (FSG and William Collins, 2020).